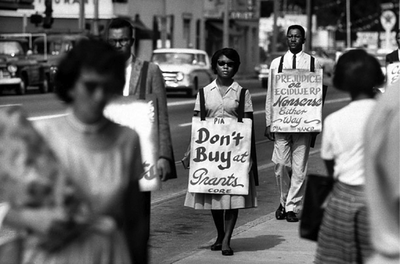 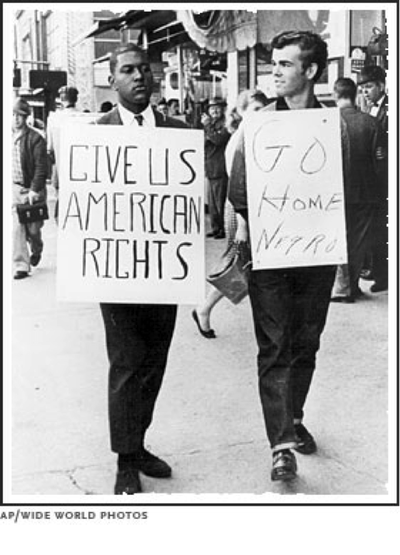 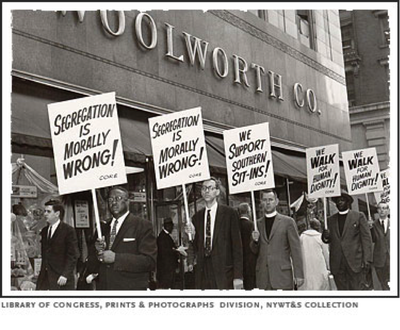 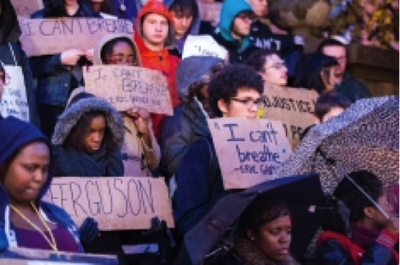 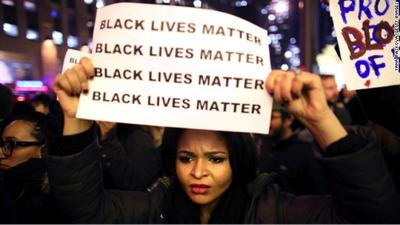 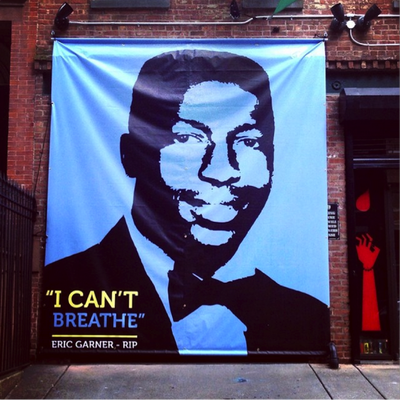 Lesson 5: Non-Violent Protests- Then and Now

Essential Questions: Why is it important to take a stand for our rights?

Objectives: Students will complete a question and answer handout that will demonstrate their understanding of multiple perspectives in regards to the Eric Garner current event. Students will also participate in class discussions about non-violent protests.

·      3.H.1.2 Analyze the impact of contributions made by diverse historical figures in local communities and regions over time.

·      3.H.1.3 Exemplify the ideas that were significant in the development of local communities and regions.

Assessment Plan: I will collect the “question and answer handout” from students to formally assess their ability to identify multiple perspectives. I will also be informally assessing their understanding by asking questions throughout the lesson.

·       “Through this unit, we have been learning about how different people experienced the Greensboro Sit-Ins by discussing and exploring multiple perspectives. These individuals made huge strides to ensure rights for everyone. One of the ways people took a stand was by protesting. Even though the Greensboro Sit-Ins helped create equal rights for African American people, there are still people who are fighting for their civil rights today. People still have very different perspectives on rights. So one way that people fight for their rights and the rights of others is to protest. We saw how many people protested in the Greensboro Sit-Ins, and many people protest today. In our current event for today, we are going to be looking at a non-violent protest that has happened recently. There are many different types of protests, but we are going to be looking at non-violent protests because those have an impact without hurting anybody or anything. People during the Greensboro Sit-Ins and people today use non-violent protests to express the importance of equality for everyone, regardless of skin color. Here are some pictures of some non-violent protests during the Sit-In Movement. This next picture was taken in Virginia, as the movement started in Greensboro began to spread. However, as seen in the next picture, there was still a lot of hatred towards this movement, where the white man is featured with a sign that says, “Go home negro.” While both black and white men fought for civil rights (as shown in the third picture), there were still a lot of white people who believed in segregation and this man pictured in the second picture shows us how this negativity affected the Sit-In Movement.

Picture 1: with caption-
The Sit-In Movement
Begun when four black students from North Carolina A & T College sat down at a section of a Woolworth lunch counter in Greensboro, North Carolina reserved for whites, the sit-in movement quickly spread to other parts of the south. Life sent photographer Howard Sochurek to Petersburg, Virginia, where young people protested the lunch counter policies at a Grants store.

·      “Now I want to show you some pictures of non-violent protests that are happening today. Has anyone heard of Eric Garner? He was a 43-year-old man who was accused of selling loose cigarettes by the police near Staten Island. Garner argued with the police officers and refused to be arrested when Police Officer Daniel Pantaleo put Garner in a chokehold (which is banned by the NYPD). This incident was recorded, and in the video, Garner repeatedly says ‘I can’t breathe’ before he dies from the chokehold. This happened on July 17th, 2014. The next day, the Police Officer and his partner were put on desk duty, so this means they weren’t on patrol duty anymore in the field. On the 23rd, family and friends said their final goodbyes to Eric Garner at his funeral service. On August 1, the city Medical examiner ruled that his death was a homicide, which is another way of saying that he died at the hands of other persons, not saying that a crime was necessarily committed. Garner died from the chokehold. On August 19th, the case was said to go before a grand jury. A grand jury is a group of people who are selected and sworn in by a court investigate criminal conduct and determine whether criminal charges should be brought. On September 29th, Garner’s family announced that they plan to file a $75 million wrongful death lawsuit against the city. This means they were upset with how everything had been handled so far. On November 21st, Officer Pantaleo testified in front of the grand jury for two hours. On December 3rd, the grand jury decided not to indict Officer Pantaleo.  This means that the officer did not go to court so he was innocent. (I will copy and paste the timeline found at http://www.nydailynews.com/new-york/nyc-crime/timeline-eric-garner-chokehold-death-no-indictment-article-1.2031916 combined with the one found at http://www.nytimes.com/interactive/2014/12/04/nyregion/04garner-timeline.html?_r=0#/#time356_10551 and show the class so students can follow along with what I say, I won’t show the website because it has the video attached.) People have been very upset about this decision because the police officer is not facing any charges. The wife of Garner is very angry and upset with the decision, but she has been urging the people to voice their feelings, but to do so peacefully. In response to this decision, people have responded violently and non-violently. We are going to focus on the non-violent protests today because again, they evoke change and take a stand without hurting anyone or anything. Non-violent protests can come in many different ways. Here is a list of types of non-violent protests (show link on the smartboard) http://www.aforcemorepowerful.org/resources/nonviolent/methods.php

Picture 4: with caption-
Here are a group of dozens of students and townspeople at the Athens County Courthouse steps as they protest the fact that the police officer was not indicted.

Picture 5: with caption-
People continue to protest the decision not to indict the police officer. This woman wants to make the point that Black Lives Matter just as much as white lives. There also been hatred in response to these peaceful protests, similar to what we saw in Greensboro.

·      I want you all to feel free to ask questions and explore the complexity of this event. I am not telling you what to think or how to feel, but I want you to be able to process things that are happening in this world in a safe environment, here in the classroom. Today we are going to focus on the protest aspect of this event, but we can explore multiple aspects of this event if we have time today, or we can extend this discussion to tomorrow as well. What I want you to take away from this is that just because the Civil Rights Movement is over, doesn’t mean that our society is now perfect. There are still people fighting for their rights and just because the Greensboro Sit-Ins allowed for black people to eat at the lunch counters doesn’t mean that all race issues have been solved. However, non-violent protests are a great way to express passion and create equality in these complicated issues.

·      One non-violent way people can protest is with ‘protest art.’ Just like the Sit-In Movement, protest art takes a stand without hurting anyone or anything. We are going to study Artist Adrian Franks’ work called, “I Can’t Breathe.” Franks decided to use colors very intentionally. How do you think the artist has used color? How does it make you feel? Why?

·      He used the blue and yellow colors in this artwork for several reasons. The color blue represents air, the black outline of Eric represents the struggles and culture that he comes from, and yellow represents fallen soldiers. Typically the color yellow jars our memory and boosts our heart rate, and blue is known for being relaxing and lowering the heart rate, do those meanings hold true for you when you reflect on this picture?

·      He created his work intentionally, because he thought the way it looked like an advertising poster would instantly look like he was taking a stand.   He took a stand on this issue by non-violently protesting, he wanted people to know that “life is precious…. everyone on earth has a story and those stories should be celebrated daily, and no one has the right to silence those stories.” I think he means that he wants Eric Garner’s story to be told because he thinks every life has meaning. He chose to write ‘I can’t breathe’ on his artwork because those were Garner’s last words, which many people are upset about because he let the policemen know that he couldn’t breathe and they still used the chokehold.

·      Since we have been talking about seeing things from others perspectives and point of view, I would like you to complete a handout where you reflect how individuals and groups of people may feel. Just like we have discussed how people may have felt during the Greensboro Sit-Ins, I want us to remember, there is no way to we can say exactly how someone else felt since we are not them, but I want us to think about how we would if we were in their shoes, experiencing what they have experienced.”

Pass out a handout that has several questions listed below:

-How do you think Eric Garner felt outside of the store as he interacted with the police?

-How do you think the policemen felt during their interaction with Eric Garner?

-How do you think African Americans feel all around the world after hearing about this event?

-How do you think policemen feel all around the world after hearing about this event?

-How do you think non-violent protestors feel?

·      After students fill out the handout, I will close out the unit.

·      “Throughout this unit, we have talked about the Greensboro Sit-Ins and how different people may have felt during this time. We also learned about primary sources, and how they provide us with accurate information since they are written by people who were actually there to experience an event. While great strides were made for equal civil rights for all regardless of color, there is still strife and hardship today where people are still looked down on because of the color of their skin. That is why I wanted us to look at a current event that is happening now. Regardless of how we feel if the police officer should or should not have been indicted, we do know that he shouldn’t have used the chokehold on Eric Garner. The fact that many people think that the white police officer handled the situation the way that he did and choked a black man tells us that people still don’t believe everyone is receiving equal rights. Because there is so much hardship in the world, it is important for us to know appropriate ways to respond. One appropriate response to expressing opinions, beliefs, and emotions is to non-violently protest an issue, such as unequal rights for all skin colors. I wanted to spend some time sharing some ways people non-violently protest, so you know an appropriate way to respond to injustice.

Segue to Final Assessment: Students will then be asked to participate in an "Agree/Disagree Activity." Students will be able to synthesize their new knowledge of what a nonviolent protest as while they are identifying their own opinion with supported reasoning. This final assessment will wrap up the unit by asking students to answer "why is it important to stand up for our rights?"
Powered by