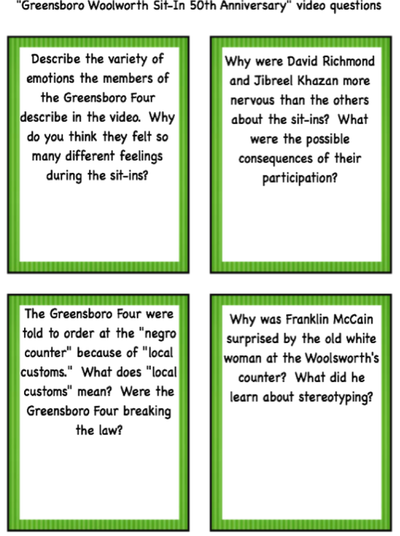 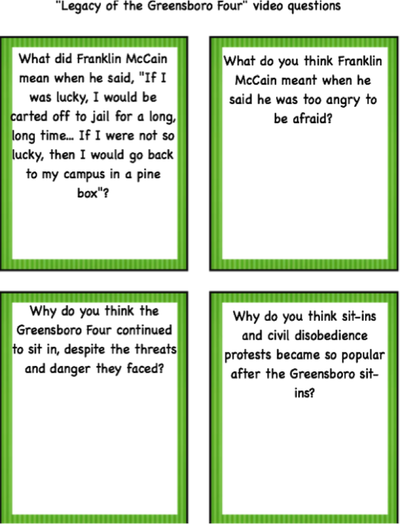 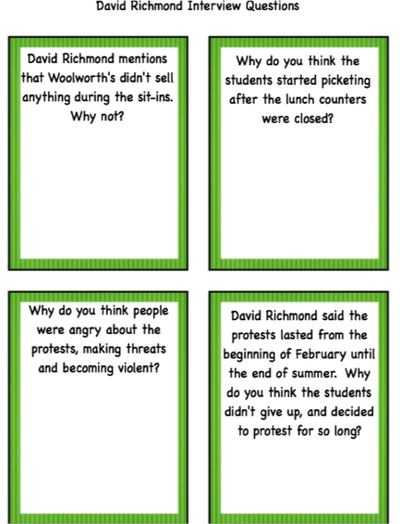 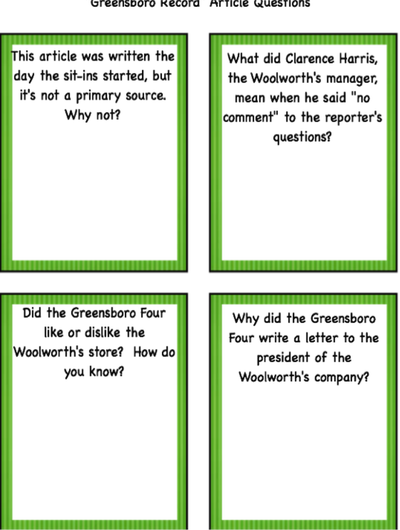 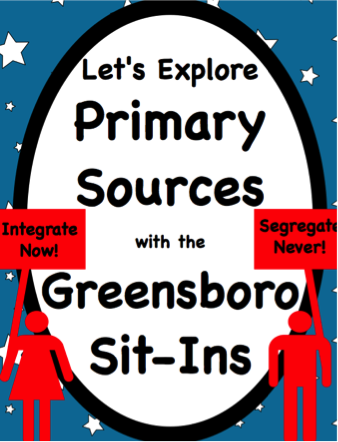 Essential Questions: Why is it important to take a stand for our rights?

Guiding Questions: Why are primary sources beneficial? How do different sources and accounts of the Greensboro Sit-Ins help us gain multiple perspectives?

Objectives: Students will complete multiple handout question sheets that will require them to synthesize and analyze pieces of primary and secondary sources that we will study as a class.

·      3.H.1.2 Analyze the impact of contributions made by diverse historical figures in local communities and regions over time.

·      3.H.1.3 Exemplify the ideas that were significant in the development of local communities and regions.

Assessment Plan: I will collect the Handout Sheets from students to formally assess their synthesis of the new information. I will also be informally assessing their understanding by asking questions throughout the lesson.

Resources: I adapted a “Teacher’s Pay Teacher’s” lesson called, “Let’s Explore Primary Sources with the Greensboro Sit-Ins. It is a great resource. I also used multiple hand out sheets, which can be adapted to meet the needs of any classroom.

·      Discuss with students what they already know about the sit-ins. “What were the “sit-ins,” and who were the “Greensboro Four”?

·      “The sit-ins were protests that began in North Carolina in 1960. At the time, it was perfectly legal for stores, restaurants, schools, buses, hospitals, and many other businesses and places, to segregate, or keep separate, people because of their skin color. For many Black Americans living in the South at the time, it was normal not to be allowed in certain places or not allowed to do some everyday things. On February 1, 1960, four freshmen from A&T College in Greensboro, North Carolina, decided to take a stand. Their names were Franklin McCain, Joseph McNeil, David Richmond and Ezell Blair, Jr. (who would later change his name to Jibreel Khazan.) They entered a popular store named Woolworth’s, which had many locations around the country. Woolworth’s sold many different types of items, and also has a lunch counter where people could eat. Although Black customers could shop at the store and buy food at a separate counter, they were not allowed to sit and eat. The Greensboro Four sat down at the White-only counter, and asked for service. The White workers at the store refused to serve them, so they remained seated at the counter until the store closed later that day. Their sit-in drew a lot of attention, and soon attracted many more participants and onlookers. The protesters were often threatened, yelled at, or harassed. However, the protests quickly grew to other stores, and many others formed picket lines outside of segregated businesses that discouraged people from entering or shopping there. Within several months, the protests were known around the country, and many stores in Greensboro stopped segregating people based on their skin color as a result.”

·      Now we are going to watch two videos, and I am going to provide you with a sheet to reflect on as we watch the clips. After the clips we will discuss the questions as a class.

(Look at #1 and #2 Handouts attached in the Gallery)

·      *After each movie, I will provide time for students to independently fill out the two question sheets. Then we will discuss these two handouts as a class. Make sure students are reflecting on the sacrifices and risks that these four men made by standing up for their rights. “How did these two videos help us learn different perspectives?” (Discuss with the class how we could try and see the world through the lens of the Greensboro Four, how it felt for them at the time, the risks involved, etc.)

·      “Now we are going to read part of an interview with David Richmond in 1972. This is another primary source, just like the videos we watched, because they were experienced by people who experienced this event.”

“The sit-ins actually lasted in Greensboro for six days. On Saturday morning it had grown out of proportion. We had downtown five or six thousand students. They hadn't sold a thing at the lunch counter since Tuesday morning. And then you had this influx of people from the rural areas of Greensboro. We had a strong [Ku Klux] Klan organization in Greensboro about twelve years ago. We anticipated trouble on Saturday, and we had it—a bomb threat in the store, and they closed it.

So we left the downtown area. We walked single file from Elm [Street] back to campus. I've never seen so many people downtown. We had traffic blocked up from Elm Street to Market and Benbow [Road], which is approximately two miles. The line was at least two miles long.

After that first week when they closed the lunch counters completely, we decided to boycott. So we set up picket lines and marched in front of the stores. We spread ourselves all over the city, at every facility that served food, and picketed those organizations. By this time the picket signs and all the traffic and all of this other stuff, the mayor and the city council and the county commissioner, everybody that's authority was trying to come to some kind of agreement, trying to negotiate or something. But it was necessary for us to picket. I can't recall how long it was before the stores were open—from February 1 all through the summer. I think they opened up when we started back to school the following year, the sophomore year.”

·      “Now we are going to reflect on this interview, by responding to questions like we did for the two videos. (pass out the handout, have students fill it out independently, then come together to discuss their responses together. Have students discuss multiple perspectives again, what perspective would motive students to start picketing after the lunch counters were closed? Why were so many people angry? What could have been some of their perspectives during this time? How would you feel if you were at the Greensboro Sit-Ins?)

(Look at #3 Handout attached in the Gallery)

·      “Good researchers find all that they can about the event they are studying. That is why I am going to read an article by a writer who documented what happened at the Greensboro Sit-Ins. However, this is not a primary source. After I read it, we will work on another handout that will help us dig deeper into why this isn’t a primary source. (Discuss with students how sources can be different depending on if the reporters were experiencing the event themselves or acting as onlookers. After filling out the handout, have students discuss the perspective of an onlooker/reporter. How might they have felt as they observed these events taking place? ‘If you were noticing these events taking place, would you want to join in on the protests or stay out of it? Why or why not?’”

A group of 20 Negro students from A&T College occupied luncheon counter seats, without being served, at the downtown F.W. Woolworth Co. Store late this morning starting what they declared would be a growing movement.

The group declared double that number will take place at the counters tomorrow.

Employees of Woolworth did not serve the group and they sat from 10:30 a.m. until after noon. White customers continued to sit and get service. __Clarence Harris, Woolworth manager, replied "No comment" to all questions concerning the "sit-down" move about Woolworth custom, and about what he planned to do.

Today's 20-man action followed the appearance at 4:30 p.m. yesterday of four freshmen from Scott Hall at A&T who sat down and stayed, without service, until the store closed at 5:30 p.m.

Student spokesmen said they are seeking luncheon counter service, and will increase their numbers daily until they get it.

Today's group came in at 10:30 a.m. Each made a small purchase one counter over from the luncheon counter, then sat in groups of three or four as spaces became vacant.

There was no disturbance and there appeared to be no conversation except among the groups. Some students pulled out books and appeared to be studying. The group today wrote to the president of Woolworth asking "a firm stand to eliminate this discrimination," and signed the letter as members of the Student Executive Committee for Justice.

Spokesmen Franklin McLain and Ezell Blair Jr., stated that the group is seeking luncheon counter service and will continue its push "several days, several weeks ... until something is done."

Both declared the movement is a student one, with no backing from the National Assn. for the Advancement of Colored People. They said they expect they could count on NAACP backing if needed. The move is not school connected, they added, but they hope to encourage more students to participate and hope that Bennett College students will join.

Four leaders, who were at Woolworths yesterday and again today, were named as McLain, of Washington; Blair, of Greensboro; David Richmond, Greensboro, and Joseph McNeill, Wilmington, all freshmen. They said today's groups came chiefly from Scott Hall at the college.

Blair declared that Negro adults "have been complacent and fearful." He declared "It is time for someone to wake up and change the situation ... and we decided to start here."

McLain said no economic boycott is planned. "We like to spend our money here, but we want to spend it at the lunch counter as well as the counter next to it."

Dr. George C Simkins Jr., head of the local chapter of NAACP, said that organization had no knowledge of the movement prior to its arising spontaneously. He said the group is 100 per cent behind the idea, and "if any legal action arises as a result, the NAACP is prepared to back the group."

(Look at #4 Handout in the gallery above)

·      ”Today we talked a lot about the Greensboro Sit-Ins and Primary Sources. It is important to find primary sources when learning about important events in our history because we want to make sure everything we are learning is accurately depicting what actually happened. An easy way to do that is to find sources that were told by people who experienced the event themselves. Today we ‘heard’ from a lot of different sources and gained a lot of different perspectives. A lot of emotions and feelings were experienced during this time, so it is important to unpack some of these feelings by looking through the lens of others so we can understand where different people were coming from that prompted the actions they took. We can’t say that everyone felt a certain way, but we can start to see how complex these emotions were by trying to understand someone else’s point of view. Tomorrow we are going to be reading a book that is not a primary source, but it will provide more perspectives that will help us further understand how people were experiencing the Greensboro Sit-Ins.”

Segue to Lesson 4: This lesson unpacked a lot of perspectives from primary sources and some secondary sources that allow students to understand why civil rights were so important to stand up for and why they are still important to stand up for them today. This builds on to what they will learn in Lesson 4 where they continue to learn about multiple perspectives while playing the role of a character from “Freedom on the Menu.” This will continue to allow them to see these events from others’ point of view.