Essential Question: Why is it important to take a stand for our rights?

Guiding Questions: Who were the Greensboro Four and what did they do? How did they stand up by sitting down?

Backward Design Approach:  Where are you going with your students?

After studying the Civil Rights Movement and the Greensboro Sit-Ins, students will be able to compare African American and White people’s potential perspectives before and after the civil rights movement by filling out a “Multiple Perspectives Chart.”

·       3.H.1.2 Analyze the impact of contributions made by diverse historical figures in local communities and regions over time.

·       3.H.1.3 Exemplify the ideas that were significant in the development of local communities and regions.

Assessment Plan: I will collect the worksheets in order to review the students’ comprehension of the lesson. I will also informally assess students as I ask questions throughout the lesson.

Meeting the student where they are:

Prior Knowledge/Connections: Students have just learned about the European explorers and settlers as well as the Tuscarora indigenous people. From this study, they evaluated how the different groups of people may have felt during this time. For this lesson, students will also be evaluating different perspectives after learning about the Civil Rights Movement.

What else do you know about rights?” (student answers will vary, answers should reflect that people have rights and they can’t be taken away.) We know that everyone has basic rights, regardless of skin color, gender, religion, nationality, age, or disability without discrimination, or judgment.

Heart of the Lesson/Learning Plan:

Differentiation/Same-ation: Students will be given multiple entry and exit points throughout the lesson by responding to class discussions and activities in multiple ways. Students will have the opportunity to work is small groups, and to write their responses independently. They also are able to participate in class discussion throughout the lesson. They will listen to the read aloud, which can meet the needs of auditory learners, and they will be able to see my notes on the board to meet the needs of visual learners.

Lesson Development: “Before 1960, some people had more rights than others. Has anyone heard of the Civil Rights Movement?” (Allow time for students to share their responses.) “The Civil Rights Movement came about because African Americans were not receiving the same rights that White people were. We are going to read some of “Freedom on the Menu”, which is going to shed some light on how African Americans were treated unfairly during the Greensboro Sit-Ins. This movement affected the entire country, including North Carolina. One of the most famous protests occurred in Greensboro, about an hour away. (READ ALOUD). As I read I will pause for brief discussions, “how do you think this made them feel?” “Why did they take a stand?” “What does it mean to take a stand by sitting down?” “Who was it that took a stand? Can anyone take a stand for equality?” (Students should discuss how anyone can take a stand and make a change when they aren’t being treated fairly. They took a stand because they knew that everyone has rights, and those rights weren’t being respected. *I will reinforce this if not said).

After read aloud, students will go back to their seats. “This book helped us understand how people were treated unfairly, which is why many people, both black and white, protested to give everyone equal rights that they deserve. Now we are going to watch a short video that will explain more about how the Woolworth Lunch Counter Sit Ins promoted equality.”

This video discusses that on February 1, 1960 at 4:30 pm, four students from NC Agricultural Technical State University visited Woolworths store. After they bought some items, they sat down at the lunch counter. No one would serve them because of the color of their skin. They were sitting in the “whites only” section. The store manager asked them to leave, but the boys stayed until the store was closed.

Within days, many other students, both black and white, began to participate in the movement. They began protesting by making signs and marching outside to let others know that they would not be shopping at stores whose lunch counters wouldn’t allow blacks to sit down and eat. This event is now called the Greensboro sit-in. (watch video)

(If time allows- if not, we will split the lesson into two days, where I end the first lesson with a few potential perspectives on the board as a class, then the next day students will work with their small groups and fill out the worksheets independently.)

Now we are going to take about 10 minutes to work with your table to brainstorm how different people felt during this time. (During this time, I will be walking around the classroom to ensure students are on task.) Write down with your group some of the ideas we have shared in class, as well as new ideas you come up with on your own.”

Concluding the Lesson/Closure/Debriefing: Now we are going to come back together. How did this activity help us understand how people may have felt during the Civil Rights Movement? (Students should say that we now have a better understanding of how different people, both African Americans and white, may have felt during this time, and that they now are able to better understand why it is so important for everyone to have rights.) We learned about rights, and how they cannot be taken away. However, some of these rights were taken away from African Americans, which is why both African American and white people led this movement to make a change and take a stand.

Was there anything special about these four boys? Did they have some special skills that made them able to stand up for their rights? What does that mean for us today? Can anyone stand up for their rights and take a stand? (Engage in a small discussion at the closing of class to get students thinking about the importance of standing up for rights even when it’s difficult to do.”

Follow-Up Activities/Parent Involvement: Since this is lesson 3 from my Social Studies Unit plan, I would continue on with my lessons if I were to actually conduct the entire unit. The next lesson is an extension of the Civil Rights Movement, where students further explore multiple perspectives while studying school and bus segregation. 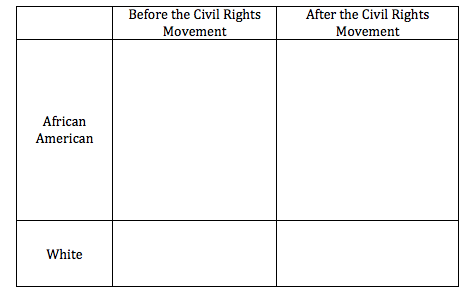